Reading between the lines of interviews with Russell Coutts, James Spithill, Tom Slingsby and Ben Ainslie the Defender for America’s Cup 35 is open to negotiation on cost reduction and Nationality rules. The Challenger of Record, Hamilton Island Yacht club owners Bob and Sandy Oatley have spoken about evolution, not revolution of the format so expect to see a lot of similar faces steering boats in AC-35.

While the majority of the movers and shakers between teams will be from the shore crews, the big names is where everyone will focus. The design and engineering of the AC 72 was a very specialised niche market. The brains trusts from ETNZ and OTUSA will be in high demand and the New Zealand Govt did a good thing by ensuring the short term wages of their team. They have secured their services for the coming cycle. So who will challenge and who will go where…..

Peter Burling possibly to Team New Zealand – RNYS : They will be there in some form or another but who will steer. I think Emirates will probably back them along with Nespresso. Dalton will be in charge again. Dean Barker may survive but with a record of 2 America’s Cup match losses under his belt he will be under pressure. While technically superior in the early stages of the cycle, Emirates Team Zealand suffered from the lack of a financially viable 2-boat campaign. They didn’t have the luxury of a B-Team like OTUSA. I can’t see someone like, Olympic Silver medalist, Pete Burling sitting on the sidelines like Ben Ainslie did. It’s a contentious one but Pete Burling will get the nod over Barker and Barker will move on. The New Zealanders need an apparent wind sailor at the helm along with a change. They need to do something different to avoid the problems of the last two campaigns. 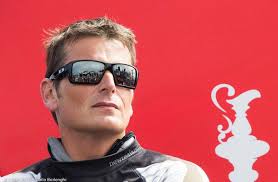 Dean Barker an option for Team Korea They nearly entered an AC-72 in the 34th Edition but pulled the pin on the campaign. I suspect they may enter again. They had a strong ACWS when Nathan Outteridge was steering. This may be a place for Dean Barker. He will be out of the limelight and able to provide leadership to a new team. This is pure speculation – he could end up anywhere.

Nathan Outteridge to stick with Artemis – Royal Swedish Yacht Club Iain Percy and Outteridge seemed to have a good working relationship. Percy will take the reigns of the Artemis Campaign from Paul Cayard. It will be interesting to see what boat Outteridge is sailing at the Moth Worlds if it is his Artemis branded one – I think that will speak volumes. He’s almost too likeable off the water and was a revelation in the commentary box. His interviews during the Artemis campaign were excellent.

Ben Ainsley to skipper the British Challenger I’m not sure what Yacht club the Ben AisleieRacing Team will sail for but it will be formidable. He will step out from Spithill’s shadow and lead well. I see this as being in a similar mold to Team SKY in cycling. The British sporting fraternity has learnt a lot about winning since being named as host of the London Games. Their Cricket, sailing, cycling and Rugby Teams have improved vastly. I expect this to be a team as clinical as Team SKY. He has the evil eye both on the course and in front of the press.

Jimmy Spithill to stay with OTUSA – GGYC He has spent the past few weeks on the talk show circuit spruiking their win. He is a major part of the Oracle Team USA brand. If you believe the English press/blogs it was Ainslie that guided the American boat to victory. In fact it was Spithill who was steering and was the one seen talking with Coutts after the infamous Foiling tack decision. Coutts and he obviously work well together. he has won the passed 2 America’s Cup Matches and has a the killer instinct in the start box. He has never been beaten by his closest rival, ETNZ, when they have lined up in Match racing (dicounting the ACWS events they DSQ’d themselves in)

Tom Slingsby to skipper the Australian Entrant – HIYC Challenger of Record He was given the reigns to the Oracle AC-45 and won an ACWS event and steered the AC-72 through the turns for Spithill. Only Ainsley could match him for his course management. If anything it would be a waste of talent to have him focussed on steering. If he is steering look for a dark horse such as Matt Belcher to form part of the after guard. When a coach like Victor Kovalenko OAM offers assistance to your campaign you don’t say no. He’s been an ISAF sailor of the Year winner, Gold Medalist and Tactician on the successful defence of the AC. He has had some time in front of the press with James Spithill and will continue to mature. Whether he can come up with the bravado and belligerence of Spithill remains to be seen.

Chris Draper to stay at Luna Rossa This is a pretty boring sort of a team that looks good but won’t really do to much. The Italians may or may not enter and Chris Draper is a good skipper but his pre-starts in the LV Cup left a lot to be desired, even when racing against the under-done Artemis.

Franck Cammas to go somewhere – Hopefully a French Challenger he ‘owned’ the Little America’s Cup in the C-Class worlds on his foiling, wing masted boat. Hopefully he can get the funding together to mount a viable challenge. Scale that up 50+ feet and you will have a competitive sailor with amazing knowledge of how to build a Foiling cat.

Some other challengers that may emerge, Oman – they have been strong in the Extreme Sailing Series. South Africa, their entry at AC-32 had a strong home following. Alighi – the last team to win before OTUSA have been growing their profile over the past 12 months in Match and Ocean racing events like Hamilton Island Race week.

By evolving the model to a more cost effective, it will bring more designers and engineers into the game, to share knowledge and iterate foil and wing designs within the whatever box rule is created. It was great to hear the line from Bob Oatley “Common sense should prevail”. This from a guy who has brokered merger’s of Australia’s biggest family owned Winery with Fosters but lets not kid ourselves the rules of AC-35 are being written by Russell Coutts and Larry Ellison. The Oatleys might be allowed to look over their shoulder to see what is about to be published, but that’s about it. All we know is until the rules are published and a schedule of lead up events etc is in place the trading season is open. If the challengers want to put the money forward there are 4 or 5 skippers with the skills to win the 35th America’s Cup.

Living in the past - remembering sailing skiffs on Sydney Harbour and trying to steer a Laser around the Parramatta River. Will post plenty of Sailing related news and Rules discussions, don't come looking for any actually knowledge about sailing fast. Connect with me on Google+

Here are the Aussies in the Extreme Sailing series