Arguably, the 12ft skiff would have to be the the most exciting development class anywhere in the world.  The rules are open to pretty much any hull shape (so long as length, beam and weight comply) and no limits on sail area or number of rigs, giving these little boats probably the highest sail area to hull length ratios of any boat.  I’ve seen over the years many changes, from symmetrical spinnakers and end for end spinnaker poles, to the current assymetrics, to unusual roach configurations on the mainsails (at one stage some boats had the foot of the mainsail shorter than the roach).  The Kiwis’ R Class have also allowed foiling skiffs, giving another added dimension to the current excitement.  These boats are the epitome of grass roots sailing.

When I was a junior sailor sailing a club owned 125, the Brisbane 12ft skiffs used to sail with the Brisbane 18 Footers out of our Manly premises, and I and my crew / best mate from high school aspired to sail one of these beasts. Sadly, we never got to do so, but I’ve always kept my eye on the Brissie 12 footers, watching the fleet develop ideas together to culminate in Interdominion and Australian National titles successes in 2002-03 by Paul O’Malley-Jones and Randall Fitzsimon.

Being webmaster at the Brisbane 18 Footers Sailing Club, I’m fortunate to be well placed to ask the Queensland 12ft Skiff Association President, Richard Billett, for this exclusive (and only slightly biased) Q&A on the 12ft Skiff and the upcoming Harsco Infrastructure 53rd 12ft Skiff Interdominion Championship 2013

The best thing is the super fast kite rides.  Nothing else in the dinghy world compares to a 12ft boat that can be airborne off waves and out-of-control fast across all 4 rigs and 10-30kts

What’s your boat’s name and who designed it?

My boat was christened “Ghetto Sled”, but has been renamed “Harsco Infrastructure” for this regatta to promote our main sponsor.  The hull was designed by Brendan Matthews of Cherub (and 12) fame.  His first 12 design won an Interdominions in Geelong in the hands of Emmett Lazich and Cameron McDonald and the new one is arguably faster, but a bit trickier to master.

What limitations are there on the 12ft skiff design?

My ability… and 3.7m hull length, 1.8m width and 45kg minimum hull weight.  That’s about it.  The rig is unlimited and that’s where the most development work happens.

The Interdominions are a competition between the Australian and New Zealand 12ft Skiffs, with an agreed set of rules – can you explain the Interdominion rules briefly and how the differ?

There is an overall scratch trophy like most classes, but the teams trophy consists of an equal number of skiffs from each country competing in a high points system.  This year there are 8 Kiwis coming across, so there will be that many in each team.  The teams trophy is highly sought after and it has been known to favour your team mate in crossings to benefit the team.  The class design rules are few, so the Australian Cherub for instance, can compete as a 12.  They have in past regattas with “turbo” rigs.  Many of the Kiwi 12s can also compete in the R-class, though some of the R-class boats are dedicated foilers now, so I’m not sure if a “low-riding” 12 would keep up.

Nuplex Composites well and truly mining in NZ (via yachtyakka.co.nz, no photog credit)

Can you expand on the trophies being sailed for?

The overall scratch trophy is the Silasec Trophy and has been around since 1956-7. The teams trophy is the Don Brookes and has also been around since the beginning.  The winning has been roughly split 50-50 between AUS and NZ. The Nimble trophy is awarded to the best placed rookie skipper and a new handicap trophy has been running for a few years, donated by Jack Winning. One of the most prized/despised trophies is the Miner’s Helmet, a prize awarded to the skiff team with the best performance in capsizing.  Points are awarded for uprightness of boat, time transom is in the air and media attention.  I won this last time the regatta was in Brisbane…. our photo, mid dive, was on the front page of SailingAnarchy.

How many skiffs are you expecting to race? 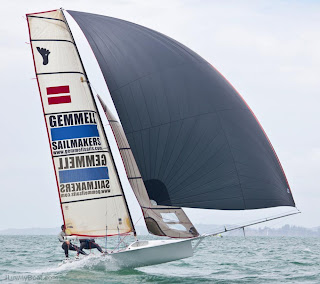 Will Nick Press win 4 in a row? photo via Qld 12ft Skiffs

NSW skiffs have taken the last four, with Nick Press taking the last three in a row.  Who are the favourites for the title?

Nick Press won the hat trick last year, in his father’s boat, with a crew he hadn’t sailed with much.  They are paired up again this year, so obviously will be contenders.  Six times winner, Tim Bartlett is coming and is always fast as is Alex Vallings.  Brett Hobson won 4 years ago and has been showing form in Sydney recently.  Chris Reid finished 2nd last year and 5th at Lane Cove, and shared the podium with Alex Vallings at the NZ trials so should be near the front.

Are there any dark horses?

Glenn Armstrong always competes well as do the guys on Variety and Skoll.

What about the Queenslanders?  It’s been a few years since Paul O and Randell cracked an Inters win, do any of the lads stand a chance?

The Brisbane fleet are probably in the dark horse category with PB Towage and Ghetto Sled placing well in the recent nationals.  Brendan Matthews in Allwood Sails will probably put a good showing in too.  We’d love to snag another interdoms title in Brisbane, as it’s been almost 10 years since Paulo and Randall took it out.

There’s four main fleet bases – Sydney, Brisbane, Auckland and Wellington.  Are there any design trends or innovations being seen from these camps?

The 4 fleets tend to migrate towards their local technology as knowledge is more easily shared on the rigging lawn. There has been a bit or work done with carbon rigging last and this season, with about 10 boats sporting the new stays. The woof hull remains competitive, with only a few others getting a look into the pointy end of the fleet. The Brisbane fleet are sailing 3 of the latest Matthews hulls and have been slowly progressing up the leader boards in recent regattas.  Another new hull design in Brisbane may change the game again, but won’t be ready for this regatta.

What sort of conditions can be expected or more to the point, hoped for?

The most spectacular racing is in anything over 15kts and up to 30kts with clear blue skies. That’s what I’ve ordered from Huey and I’m sure we’ll get at least some of that. The racing is fast and fun regardless of the wind and that’s part of what makes the 12ft skiff special.

Where can more information be found?

The Notice of Race and Entry Form can be found at the regatta page on the Brisbane 18ft Sailing Club website.  We’ll also be posting the results and race reports and pictures there, and these will also feed to the Brisbane 18 Footers Twitter and Facebook accounts, and the Queensland 12ft Skiffs Facebook group .   Thanks Richard, and good winds to all skiffies! 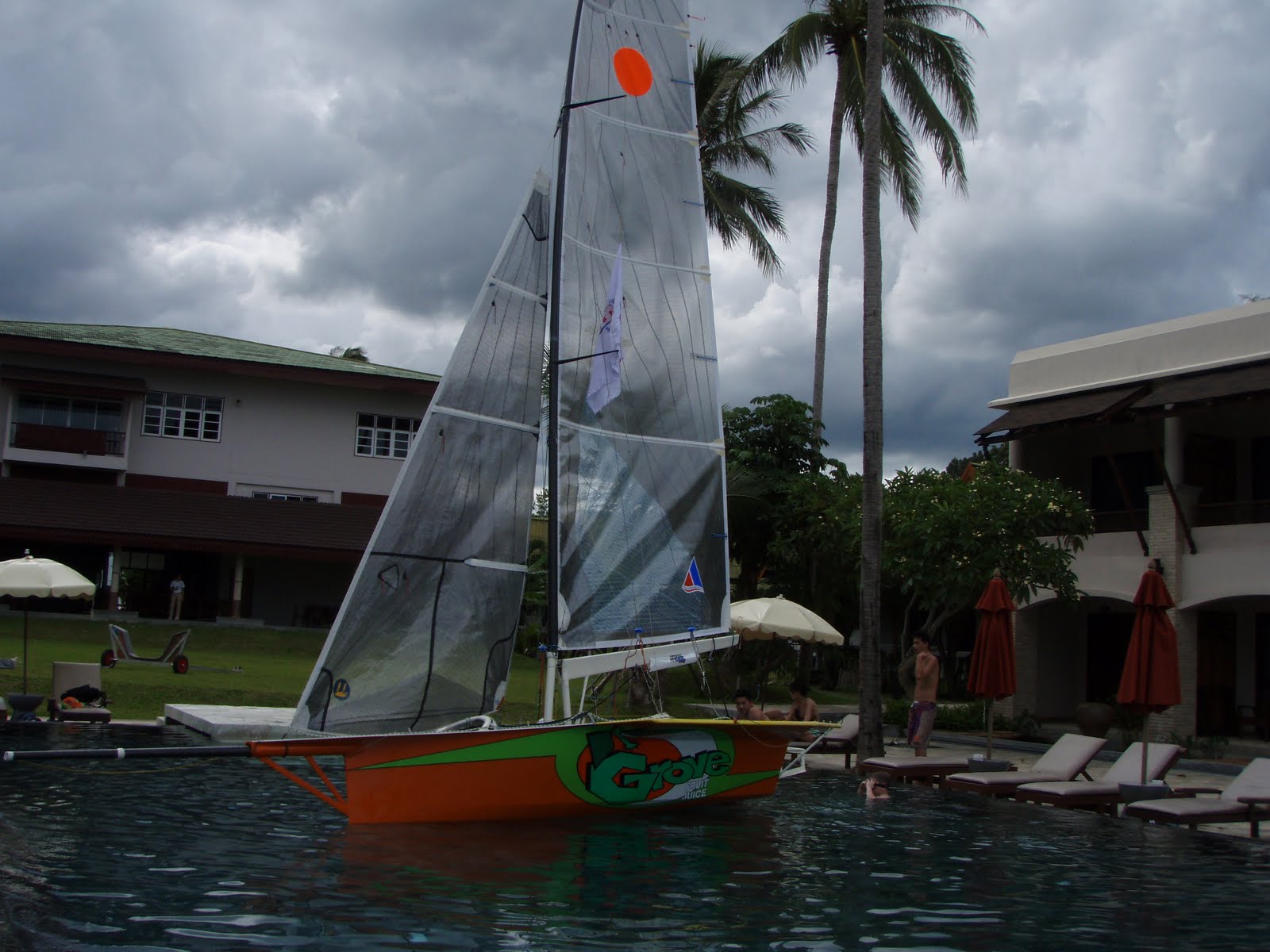 Is it just me or is it odd for Rechichi and Cook...